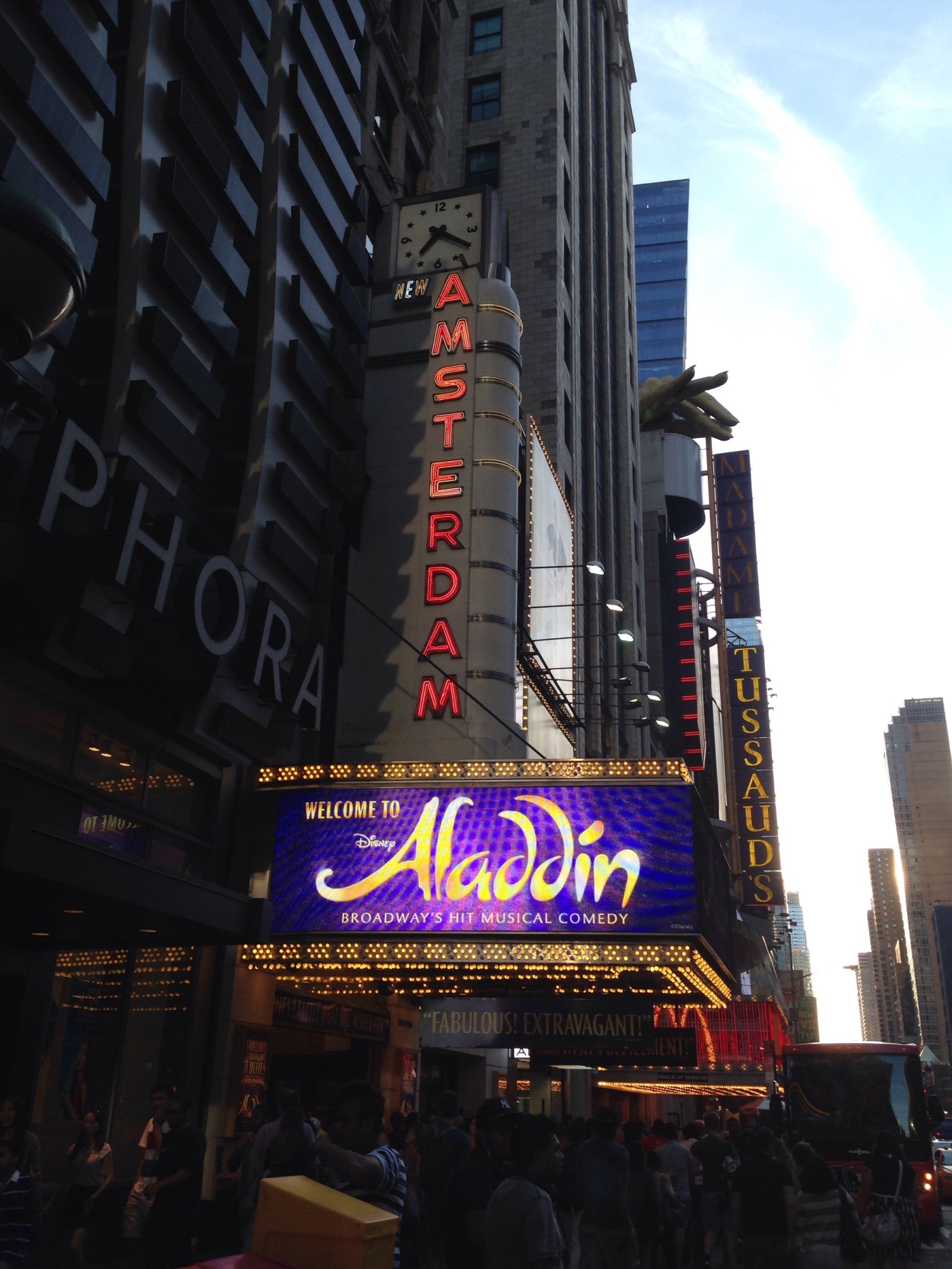 I was recently invited to attend a MyPrinty social media event for bloggers sponsored by HP in New York City! The event was on a Sunday night, so my family and I decided to arrive Saturday morning and make a weekend trip out of it! (Who doesn’t want an excuse to spend a weekend in NYC?) After deciding on our plans, I knew immediately that if we could afford it and could find last minute tickets, Aladdin was a must see Broadway show for my crew of Disney lovers! And boy was I ever right! Here are my 5 reasons that every Disney fan must see this show!

1. You can be a VIP, thanks to your Disney Visa! After scouring the internet for hours trying to score a “cheap” deal on tickets, I settled on splurging a bit instead. I used my Disney Visa by Chase through Ticketmaster to purchase a VIP package! This not only scored us amazing second row seats, but here is a picture of the awesome swag we received with our package too! It was well worth the money to us as our 11 year old princess truly felt like a VIP and this was her very first Broadway show ever! (I fear we may have set the bar pretty high for future expectations though, but doesn’t Disney always do that?) Here is the link for the VIP package if you would like to go ahead and purchase tickets now, this minute, as I highly recommend you do! And if you are a Disney fan, I know you already have a Disney Visa, if you don’t now is the time to take the plunge! http://www.disneyrewards.com/offers/aladdinvipfy15/

2. You must see Disney’s New Amsterdam Theatre!  When we arrived at the New Amsterdam Theatre, nicknamed the “the house beautiful,” we knew we were in for a treat! The theater is absolutely breathtaking, built in 1902 in an Art Nouveau style of architecture, it has quite a colorful history. It housed many famous productions over the years, yet fell into decline after being used as a mere movie theater. The Walt Disney Company finally leased and renovated it in 1995, which also began a turning point in the rejuvenation of Times Square and the Broadway district as well.

If you look at this picture, our amazing seats were second row on the left orchestra side. My 11 year old princess had the isle seat, boasting a completely unobstructed view of the stage. (Bar- high!) Sitting so close to the stage made us feel like we were actually part of the show! Many actors made eye contact with us and it was amazing to see the detail in the costumes. We still wondered how they accomplished many of the illusions that were performed so close to us during the show, we still could not figure it out even that close!

3. If you loved the movie, you will adore the show! To prepare for the show, of course we had to sit down and watch the animated feature at home before we left! I kept thinking, how are they going to turn this into a Broadway Musical? The giant snake, the talking monkey, the mischievous bird- the awesome GENIE! Well my friends, you have no worries, the script for the Musical was genie-ous! (See how I did that?) The writers and composers did an amazing job of maintaining the highlights of the original story, but it also felt like a completely original production as well. (As an added bonus, those that love Villains like I do will appreciate the fact that actor Jonathan Freeman, who voiced Jafar in the animated feature film, actually plays Jafar on Broadway! And friends, he is absolutely amazing!)

4. The music, the costumes, the set, the pyrotechnics and the magic carpet ride! Here are some fun facts about Aladdin that you may not know! The composer, Alan Menken, has won 8 Academy Awards and has been nominated an astounding 19 times! (Proof the music, which was all original to the show, except for a few nods to the animated feature, is amazing!) The creative team behind Aladdin who designed the costumes, created the choreography, designed the scenes and lighting, etc. has won 17 Tony Awards for this show! (Proof that creatively this musical is outstanding!) During this one performance alone you will see 337 handcrafted costumes designed by Tony Award winner Greg Barnes, using fabric imported from 9 different countries! (Proof the costumes were amazing!) And lastly, from dazzling pyrotechnics to the show stopping magic carpet ride, this show boasts 84 different illusions and effects! (Proof every family member, of all ages will be entertained by this show, no matter how close you sit to the stage, I guarantee it!)

5. Lastly, you will love, love, love the amazing Genie, James Monroe Iglehart! The Genie steals this show, there is no doubt about it! He is funny, he is energetic, he is a talented singer and dancer, and he plays this part so well that you really want to go up there and sing and dance along with him! (But don’t, security frowns upon that, don’t ask me how I know.) Mr. Iglehart has not only won a Tony Award for this performance, but he has become the face of this musical, and all the accolades are well deserved believe me! You will find yourself wanting to stand and cheer every time he concludes a performance, yes, he is that good!

So there you have it! If you are headed to New York City, or even if you plan a special visit just to see this show alone, Aladdin the Musical is a must see! Make sure to arrive in plenty of time to get a picture in the lobby with the magic lamp, and take time to explore and see the beauty of Disney’s New Amsterdam Theatre! You will not be disappointed! Enjoy your visit to the fabled city of Agrabah, Salaam my worthy friends!

This site uses Akismet to reduce spam. Learn how your comment data is processed.

Some of My Favorite Walt Disney World Pictures